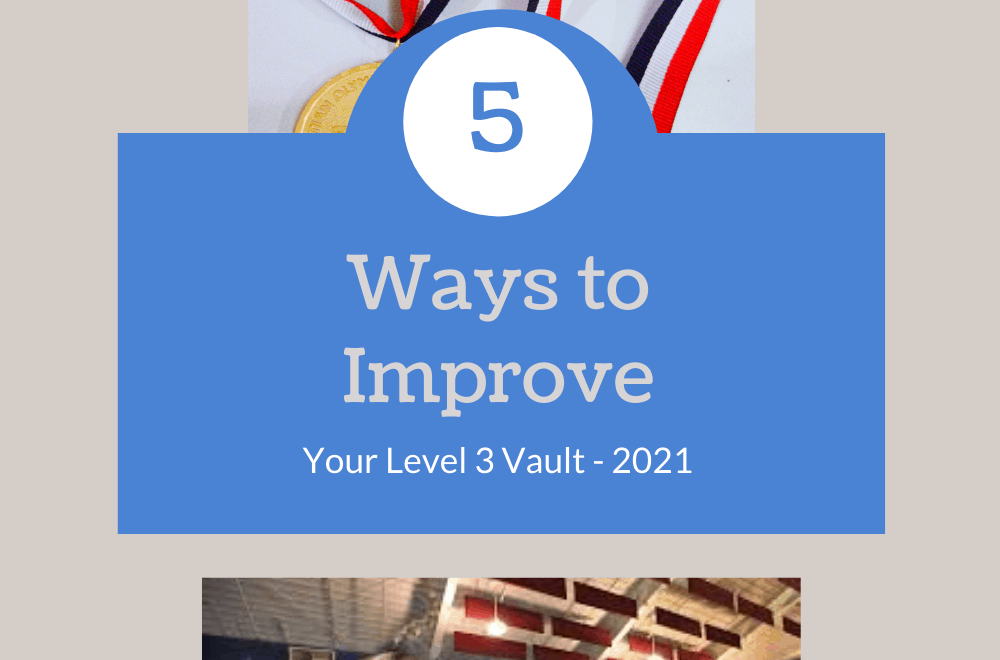 By the time you’re done reading, you’ll know exactly what the judges are looking for in a Level 3 vault.

The Level 3 vault must be performed over a mat stack that is at least 32 inches high. Unlike at Xcel Silver (which performs the same vault), the use of an alternative springboard is NOT permitted.

The gymnast is allowed to perform two vaults, and the best score counts.

There are three phases to any vault: preflight, support phase, and postflight. If a deduction can be taken “in each phase”, it means in each of these three phases. The landing has its own set of deductions, and is not considered a vault phase. Each vault begins with a run down the runway, but the run is not judged (with the exception of Level 2 vault).

Here’s a video of a handspring vault over the mat stack. Keep in mind that this gymnast is using the alternative springboard, which is not allowed at Level 3.

First, there’s the obvious difference: Level 3 vaults over a mat stack. Now that we have that out of the way…

The biggest difference between Level 3 and Level 4/5 is that there are NO deductions for height or distance in a Level 3 vault. The reason for this is the potential variation in mat stacks at different meet sites. Some meets might have a firm resi pit, others have a soft resi pit, some might have a trapezoid shaped vaulting apparatus, and still others might have stacked mats of varying degrees of firmness. To improve fairness and consistency in scoring, the height and distance deductions have been eliminated from this vault.

The only other difference is that instead of a deduction for angle of repulsion in a Level 3 vault, there is an up to 1.00 deduction for contacting the mat stack past vertical. This deduction describes the initial contact of the gymnast’s hands, rather than the angle at which the hands leave the mat stack.

READ NEXT: 5 Tips for a Stellar Handspring Vault

Xcel Silver and Level 3 vault appear very similar, when you look at the vaults. However, the deductions do have a few differences.

Next, Level 3 gymnasts receive a larger deduction if their vault is spotted by the coach (2.00 vs 1.00 for Xcel Silver).

Xcel Silver gymnasts have an up to 0.10 deduction if their legs are crossed, and this deduction does not apply to Level 3. This deduction is there because Silvers can also perform a ½ on over the mat stack (Level 3’s cannot).

Level 3 gymnasts have a deduction for contacting the mat stack after vertical, and Xcel Silver gymnasts do not receive this deduction.

You can see these differences in the chart below.

Now, what should the gymnast focus on when performing her Level 3 vault?

The run is not judged at any level except Level 2, but it is still a very important part of the vault. Many times, I can tell what the vault will look like just from watching the run. It’s that important! Without a strong run, the vault will be sluggish and lacking in dynamics.

So what should the run look like? The gymnast should accelerate as she moves down the runway. She should have a slight forward lean, to continue her momentum forward. She should maintain her running speed as she approaches the springboard. If she slows down, she will lose all the momentum she just gained by running fast down the length of the runway.

The transition between the run and the vault is marked by the hurdle. The hurdle should be quick, and relatively low to the ground. Many coaches will teach the gymnast to perform a backward arm circle during the hurdle, in order to get the arms moving overhead as she initiates the vault.

When the gymnast contacts the board, she should have a slight backward lean, to transfer her forward momentum upward as she inverts. Her arms should be in front of her, moving toward overhead as she reaches toward the mat stack.

READ NEXT: The Essential Guide to a Great Vault Run

2. A tight, straight body throughout the vault

In a Level 3 vault, body position is the main focus of the vault. The idea is to teach good, straight body position without worrying about height and distance.

From the time the gymnast hits the springboard, she should maintain a tight, straight body position. The power and rotation are created by the run, hurdle, and, once she touches the mat stack, the block through the shoulders. The gymnast’s body should not need to change position, or become segmented, to execute the handspring vault.

3. Straight arms during support and a good block

The “block” is the part of the vault in which the gymnast leaves the mat stack, transitioning from the support phase of the vault to the postflight. Block means to push off the mat stack. The gymnast should block equally from both arms at the same time (up to 0.20 deduction for alternate repulsion).

The block should be initiated through the shoulders, with the gymnast keeping her arms straight. If the arms are bent, she can lose up to 0.50, and if the arms are so bent that the head contacts the mat stack, she will lose 2.00! Good shoulder and head alignment are also expected during this phase of the vault, with deductions of up to 0.10 for incorrect head alignment and up to 0.20 for incorrect shoulder alignment.

4. Get off the mat stack quickly

The gymnast is not required to generate a certain amount of height or distance, but it is still important to perform a fast, powerful vault!

The judges can take deductions for overall dynamics of the vault. Dynamics refers to the quickness and power that occurs during the vault. A vault that stays on the table for a long time, or one that appears sluggish, will incur a deduction for dynamics. The dynamics deduction is up to 0.30, with the maximum deduction occurring for vaults that seem to barely make it over, or vaults that require assistance of the coach.

In addition, there is a large deduction of up to 0.50 if the hands are in contact with the mat stack too long (too long in support). So as you can see, it is very important for the gymnast to get off the mat stack quickly!

There is another large deduction of up to 1.00 if the gymnast contacts the mat stack past vertical. The further she is past vertical, the larger the deduction. The graphic below demonstrates the increased deductions as the angle past vertical increases.

5. Good posture and control on landing

If you listen to a gymnastics broadcast on TV, you will always hear the commentators talking about how important it is to stick your landing. (If you HAVEN’T heard them say that, you haven’t been watching enough gymnastics on TV!) While stuck landings are important, especially at the NCAA level, there are many other aspects of the vault that are at least as important.

As far as landings go, posture on landing is a common deduction that can be taken. This deduction is in addition to steps or other body movements. Gymnasts can lose up to 0.20 for posture on landing, and once they reach Levels 6 and 7, the posture deduction becomes 0.50.

If the gymnast performs a deep squat upon landing, she can be deducted up to 0.30. It’s a really good idea for gymnasts to learn to land with their chest and head up, as it will serve them well in the higher levels. Posture may not be the biggest deduction, but coupled with landing deductions such as steps and wobbles, it can definitely add up.

Control on the landing can include steps, hops, arm movements, and additional trunk movements to maintain the landing position. All of these can result in deductions, depending on their severity. A slight hop or foot adjustment can elicit a deduction of up to 0.10.

To sum it up, a great handspring starts with a strong run. The gymnast must keep a tight, straight body throughout the vault. She must produce a strong block through the shoulders, and ideally, the block should occur by vertical. Finally, she should land in control with good posture.

How to Do a Stellar Handspring Vault