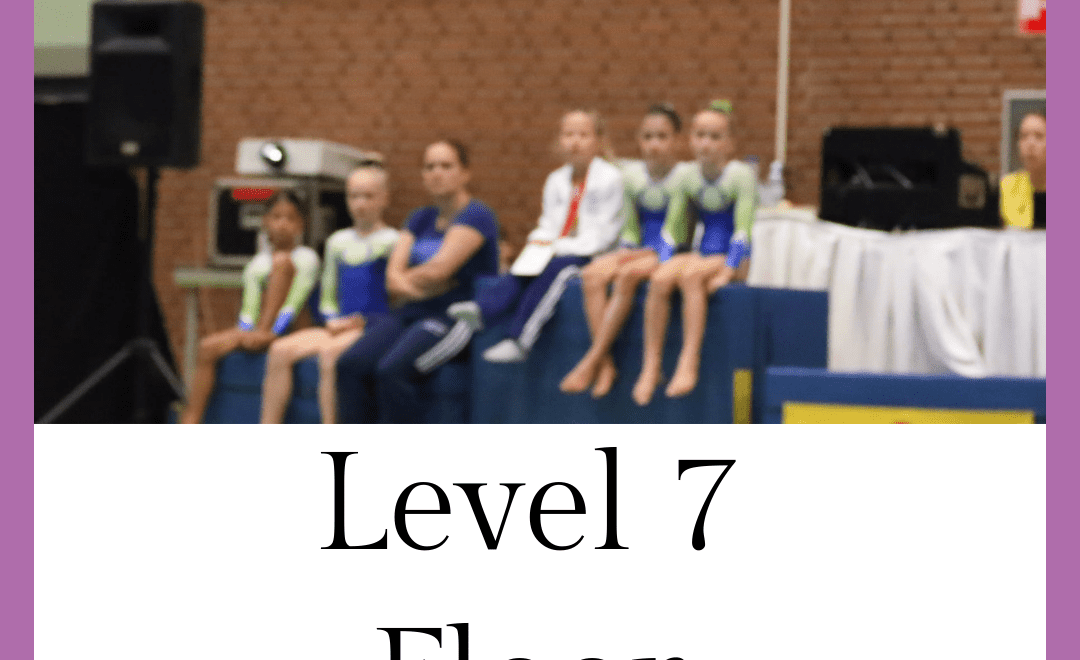 Level 7 floor routines are some of my favorite routines to judge. Level 7 gymnastics is the second optional level in gymnastics. This means that the gymnast gets to use their own choreography. Level 7 floor music can be chosen by the gymnast and coach. I love judging these routines because they have basic requirements, and plenty of room for the gymnast to dance and perform. There are no composition deductions for not performing difficult skills.

All of this leads to Level 7 floor routines that are focused on basics, along with artistry and rhythm. There’s enough time for the gymnast to show off her personality, enjoy competing, and begin to progress her skill level. It’s a lot of fun for everyone!

Level 7 gymnasts need 5 A skills and 2 B skills on each event (bars, beam, and floor). All skills in gymnastics are evaluated based on their difficulty level, and they are given a value from A through E. A skills are the easiest, while B skills are a bit more difficult. The gymnast is allowed to choose the skills that she can perform the best in each of these difficulty categories. Each A skill is worth 0.10, and each B skill is worth 0.30. Deductions are taken off the Start Value if a skill is missing.

In a Level 7 floor routine, gymnasts are allowed to perform A and B skills, along with unlimited C dance elements. Performance of acro C’s or any D/E skills will result in a 0.50 deduction from the Start Value for a restricted element.

Examples of B skills on floor include:

The Level 7 requirements for floor are as follows:

An acro pass is a tumbling pass consisting of at least one acro element. The backward acro pass in a Level 7 floor routine must consist of at least two acro skills, directly connected. One of these skills may be a back layout, or a backward salto stretched, landing on two feet.

If a back layout is not performed in this pass, the forward acro pass MUST include a front layout.

A direct acro connection means that there can be no steps, hops, or loss of balance between the skills. Extra steps are common after a front handspring step-out, so if the gymnast uses this skill in her acro pass, make sure she takes a long step forward into the next skill to avoid “double stepping”.

All of the skills in the acro pass must have flight. Examples of flight skills are:

Aerials will NOT meet this requirement. The pass must include a salto.

Examples of forward saltos are:

This requirement is IN ADDITION to the backward salto acro pass requirement. The gymnast must perform two acro passes to get credit for both of the acro Special Requirements.

The salto/aerial must land on the bottom of the feet first to get Value Part and Special Requirement credit. An example is a front tuck that lands on the back or the seat first will not get credit.

If the gymnast did not perform a back layout salto, she must perform a front layout in order to receive credit for the acro Special Requirement.

Examples of Floor Routines That Meet the Acro Requirements

There are many different combinations to choose from, and I love that this rule allows gymnasts to select skills they can perform the best. Some gymnasts might be stronger back tumblers, and some may be better front tumblers, and now ALL of them should be able to meet the requirements!

There is an almost endless variety of combinations that a Level 7 gymnast can do to fulfill this requirement.

The dance passage is also a common place for gymnasts to perform one or both of their required “B” elements. Some examples of dance “B” elements are:

If the gymnast performs a “C” dance element, it receives “B” credit. Unlimited dance “C” elements are allowed in a Level 7 floor routine.

This requirement is pretty self explanatory. The gymnast must perform at least a full turn on one foot. The free leg position is optional.

This is another good place for a Level 7 gymnast to get one of her “B” Value Parts. Examples of “B” turns are:

Caution: creative turns are more difficult, and are much more likely to be marked as incomplete. Incomplete turns (more than 90° incomplete) receive credit for the lower value part.

Also, if the gymnast does not hold her leg in the correct position throughout the entire turn, she will not receive “B” credit. This could result in a 0.30 deduction from the Start Value, if she was counting on that turn for her B.

In Level 7 gymnastics, the emphasis is on performing basic skills with excellent technique, to prepare for the higher levels. The routines that meet the requirements, with the cleanest execution, are the ones that will finish on top. In addition, these gymnasts will be the best prepared to move into Level 8 and beyond. What do I mean by “clean execution”? A gymnast with clean execution has minimal form deductions.

Here are some of the most common deductions that can occur during a Level 7 floor routine. These deductions are assessed each time they occur.

In a Level 7 floor routine, there are several categories of “general deductions”, which are evaluated by looking at the routine as a whole. These deductions are:

The best Level 7 floor routines are clean, dynamic, and full of personality! As discussed above, it’s best to choose skills that showcase the gymnast’s abilities. For instance, if the gymnast has poor flexibility, she might opt to perform only the minimum elements that require a full split, and use other skills to fulfill the rest of the requirements. If her feet aren’t as flexible, the routine might use choreography that doesn’t rely on fully pointed feet. You get the idea!

The top Level 7 floor routines will also show great rhythm, artistry, and footwork. The gymnast should should have quick, high tumbling, and clean dance skills with good form and flexibility. It’s fun to see gymnasts really getting into it when selling their routines! There’s a lot of room to be creative in a Level 7 floor routine, so find an original piece of choreography and keep working to show it off!