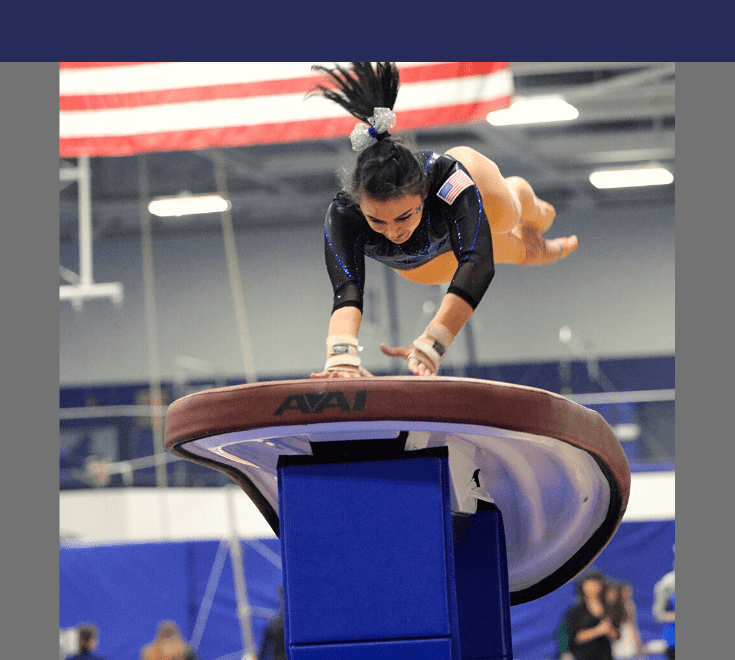 This article has been updated to reflect the changes in the 2022-2026 DP Code of Points.

Level 8 vault… this assignment used to (and sometimes still does) strike fear into the hearts of judges. Would all the gymnasts make it through without crashing? I always consider it a success if I don’t gasp or jump out of my seat during a Level 8 vault session.

As the first level that gymnasts are allowed to perform flipping vaults, there is always the potential for disaster. Luckily, we are now starting to see the first generation of gymnasts who have gone through Level 6 and 7 using the “timer” vault with the mat stack. Soon, we’ll know if the new Level 6/7 vault is succeeding in its goal of improving Level 8 vaults.

So, aside from staying alive and hopefully landing on your feet, what else is important when performing a Level 8 vault?

Let’s first go over some terminology that will be used in this article.

Preflight – the time between when the gymnast leaves the springboard and when she first touches the vault table.

Support Phase – just like it sounds, it is the time in which the gymnast’s hands are in support on, or in contact with, the vault table.

Postflight – the time between when the gymnast leaves the table and when she lands on the mat.

Start Value – the maximum possible score of a vault.

There are several different types of vaults that a Level 8 gymnast might do. These vaults are divided into groups based on the way the gymnast approaches the vault table.

Group 1 consists of all forward-entry vaults, with or without twists, that do not flip.

Common vaults from Group 1 include:

Here is a table listing the Start Values of these vaults.

Group 2 consists of forward entry vaults that do flip. These vaults are not allowed in Level 8.

Group 3 consists of Tsukahara-entry vaults. A Tsukahara vault is one in which the gymnast performs a ½ twist during the preflight.

In Level 8 vault, there are two allowable vaults from Group 3:

Here are the Start Values of these vaults:

Group 4 includes Yurchenko entry vaults. These vaults begin with a roundoff onto the springboard, so the gymnast approaches the vault table backward.

Here are the allowable vaults for Level 8 from Group 4:

Here are the Start Values of these vaults:

Group 5 also consists of vaults that start with a roundoff onto the springboard. However, in this group, the gymnast will perform a ½ or 1/1 twist onto the table.

There are only a handful of Yurchenko ½ on vaults that are allowed in Level 8. The allowable vaults in this group are:

Here is a chart listing the Group 5 Start values:

Start Value and Its Relationship to the Level 8 Vault Score

A gymnast’s vault score is comprised of her Start Value, minus all applicable execution deductions.

The higher the Start Value, the higher the gymnast’s potential score. Of course, there is a higher potential for error as the vaults get more difficult.

A gymnast might have a great handspring vault, and it will earn a consistent 8.5. However, the handspring vault only starts at a 9.0. To get a score in the 9.0+ range, she’ll need a more difficult vault. Typically, Tsukahara and Yurchenko entry flipping vaults are the “gold standard” for the highest scoring Level 8 vaults. The Tsuks and Yurchenkos, tucked or piked, start from a 10.0 and have the highest scoring potential of all of the Level 8 vaults.

What Makes a Level 8 Vault Great?

All great Level 8 vaults should have excellent dynamics, which is the overall power and ease of the vault. The vault should be big and powerful, and it should look easy – the gymnast should not appear to struggle to get the vault around.

These vaults should have a lot of height off the vault table. If a vault is lacking in height, there are usually other problems that led to the lack of height. These problems could be (among others) a shoulder angle or body position that slows the rotation, staying on the vault table too long, or not running fast enough.

It’s possible to have a great vault with a poor landing. I’ve seen huge, dynamic vaults that end in six running steps off the mat because the gymnast had so much power. But to get the best score, the gymnast needs to control her power and land cleanly.

The best handsprings and twisting vaults have great, tight, straight body position throughout. The head and shoulders should stay in alignment with the body.

During twisting vaults, the twist should be quick and crisp. The gymnast should not twist while her hands are in contact with the vault table.

When performing these vaults, the hands should leave the table by the time the gymnast’s body is vertical. If the hands stay on the table too long, it is a deduction. Also, the gymnast will not get the necessary height and distance if she does not get a quick “block” off the table!

Finally, the gymnast should land cleanly, with her chest up and feet no further than hip-width apart. Steps, body posture errors, and a squat on landing will all incur deductions.

Flipping vaults typically don’t have many deductions in the preflight. You might have a leg separation or a bit of knee bend, but it’s not usually a major deduction.

During the support phase, there are no deductions for too long in support, or being on the table past vertical. The gymnast should maintain good form, head and shoulder alignment, and if she’s doing a tucked vault, don’t tuck the legs too early.

The vast majority of the deductions are going to occur in the postflight and on the landing. The best vaults have exceptional height and good distance. The gymnast should open up from her flip prior to landing, and land in control with her chest up. Many vaults never fully open up, which can result in deductions for the open AND for posture on landing!

We’ve touched on a lot of these in the previous section, so here are some of the common possible deductions for Level 8 vault.

Deductions that apply to each phase:

Don’t forget that a key component of the vault is not scored: the run. Without a great run, the vault will never achieve its full potential. See The Essential Guide to a Great Vault Run for more details on how to get your run up to speed!

A great Level 8 vault is big and powerful. It should have great height and distance from the table, and good body position throughout. Flipping vaults should open up and land with good posture. Twisting vaults should show a crisp, clean twist that makes it all the way around. All vaults need a strong run to get them started, and they should finish with a nice landing.

Tips and Resources to Build Your Level 6/7 Vault Score